Previous in ToC: Falafels from Scratch

Next in ToC: Curl Up with a Vegan Quinoa Bowl Topped with Rich Tahini Sauce 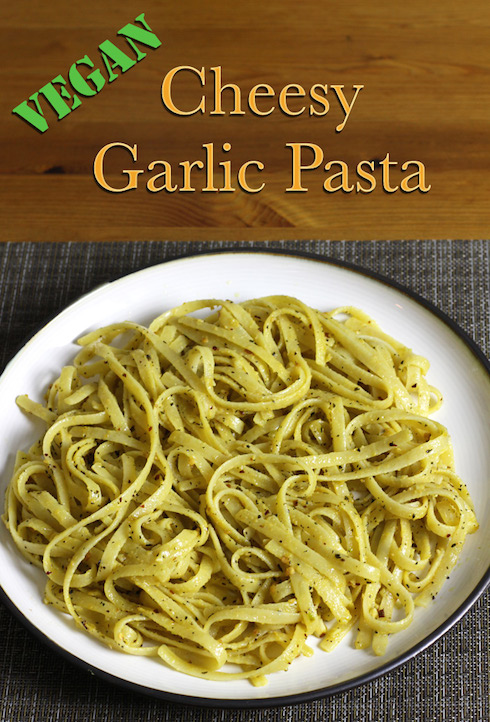 I'm not sure I have the words for the way this cheesy, garlicky pasta makes me feel. I usually have it on a weekend evening after a day spent running around, accompanied by some kind of adult beverage. It feels like a mini-celebration of whatever little accomplishment the day produced. Or if there was no accomplishment, it feels like the perfect way to top off a day spent exploring the city, reading and recharging. Fettuccine, garlic and olive oil were meant for eachother. The cheesy flavour is supplied by nutritional yeast. Dried basil adds a faint hint of pesto. This is one of those dishes where the vegan version tastes better than the dairy version. The combination is way more than the sum of its parts.

If you're not familiar with nutritional yeast (or nooch as it's sometimes called on the internet), don't be put off by the scary sounding name. It's a vegan secret weapon—a little umami flavour bomb that instantly reminds you of the best qualities of parmesan. It's normally found in health food stores or bulk stores. It doesn't look particularly appetizing in the bin—the pale yellow flakes look more like fish food than a great addition to a meal. If there's a deluxe version and a non-deluxe version at the store, I usually spring for the deluxe. The flavour is just a little richer.

Nooch is also amazing nutritionally. It's packed with B vitamins, sometimes fortified with iron and B12, and it's about 50% protein by mass. The 1 Tbl we're adding to this pasta dish contributes about 3 g of protein to the 25 g already in the noodles. It's not often that something that tastes so good is good for you.

The dish as a whole is not exactly low-calorie, but as occasional indulgences go, you can do a lot worse.

Bring a big pot of heavily salted water to a rolling boil. Set a timer for 9 minutes. Add the fettuccine and mix it into the water.

In a large, deep skillet, warm the olive oil on medium low heat.

Roughly chop the garlic with a little salt (salt brings out the garlic flavour), then add chili flakes (if using) and continue mincing until the garlic and chili are well integrated and the garlic is in small chunks. Add garlic/chili mixture to the frying pan with the olive oil and mix. Just let the oil soak in the garlic flavour on low heat until the pasta is almost ready.

When there are two minutes left on the timer, bring the frying pan to medium-high heat, stirring frequently. When the time is up, drain the pasta and leave it in the collander. Mix the basil and nutritional yeast in with the garlic and chili and stir just until everything is well combined.

Quickly add the pasta to the pan and cook for about a minute, mixing frequently.

Serve immediately. The pasta should be steaming hot.