Next in ToC: Vegan Mushroom Pate with Lentils and Cashews 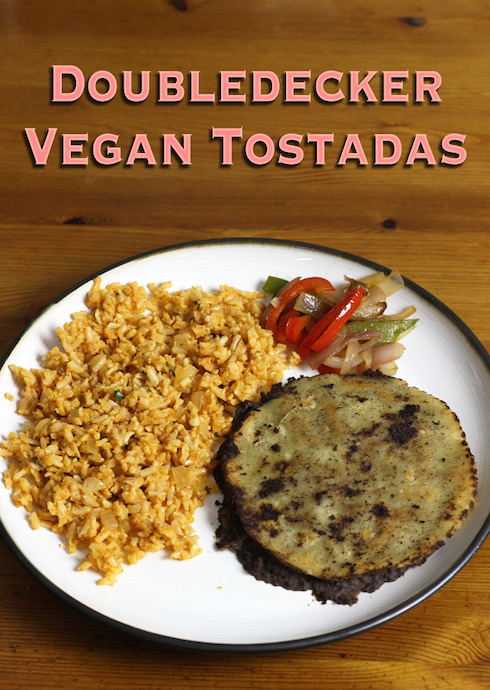 I struggled a bit with what I should call this. It's something like a quesadilla, but with spicy refried black beans instead of cheese. It also resembles a tostada because it features corn tortillas deliciously pan-fried in oil. But unlike tostadas, it has a second tortilla on top. So it's a “doubledecker vegan tostada” for want of a better name. What is not in doubt is my love for them. When corn tortillas get a few days old, their texture becomes a little rubbery. The solution is to fry them up. And it's a very good solution.

tomato salsa and other condiments as desired

You can buy the tortillas and refried beans or make your own. I usually make these tostadas with the leftovers from tacos. If I'm feeling ambitious on taco day, I make fresh corn tortillas and chipotle refried black beans from scratch.

With the beans and tortillas squared away, the only other prep job is sauteeing the onions and peppers.

To get the peppers ready, I'm going to show you a little trick I learned from Gordon Ramsay.

First, cut the stem off the pepper.

Next, lay the pepper on the cutting board on its head.

Take a sharp knife and slowly work from top to bottom on one of the pepper's lobes. It's a little like peeling an apple.

Repeat for all of the lobes and you've got all the flesh.

All the seeds and ribs are left whole and are easily tossed.

Slice up the pepper and cut the slices in half.

Slice up the other pepper, and slice the onions into similar sized pieces.

Heat a large, shallow frying pan over medium-high heat. When hot, add 2 Tbl canola oil and carefully add the onions and peppers. There should be sizzle.

Saute for a minute or so, then add sugar and salt.

In the last minute or so, add a dash of red wine vinegar. Mix it in and continue cooking until it evaporates.

Remove from heat and transfer to a plate.

Get a fresh frying pan and heat it over medium heat. Add another 2 Tbl of canola oil. When hot, put one of the tortillas on to fry.

Spread the refried black beans on the tortilla with a spoon.

Spread onions and peppers on top of the beans.

Put the second tortilla on top and allow to fry for a few minutes.

Carefully flip the tostada and let the other tortilla fry for a few minutes more, until the filling is piping hot.

Serve with salsa, rice and extra veggies on the side. It's a little messy, so I eat it with a fork and knife.