Warm up with Some Potato Leek Soup 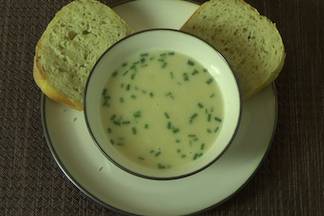 My quest for warmth and comfort in the form of thick soup continues. The reasons aren't hard to find: November this year is making a serious effort to out-December December, which leads to a sneaking suspicion that December is going to seriously mess with the collective Toronto psyche (a delicate creature at the best of times). The change back to standard time always means that dusk hits while most of us are wrapping up our work day. And Torontonians all remember very well last December's ice storm with its combination of falling tree limbs and power lines, followed by three days of ludicrously low temperatures and no heat. Even though many of us have taken steps to guard against a similar desperate situation in the future, the sight of tree limbs weighed down by snow this morning (did I mention it's still November?) will no doubt send many a subconscious mind scrambling for the closest soup-based refuge.

One of my favourite soups is potato leek, represented on the internet by such examples as this beauty inspired by Julia Child and this creamless one in Epicurious. The challenge I want to tackle here is how to get a thick, flavourful soup without resorting to dairy. Yep, it's time for another installment of I-can't-believe-it's-vegan.

One of the daunting tasks in this recipe is getting the leeks into an edible state. When you see them in the grocery store, they look so massive and intimidating, like the time Gilligan planted radioactive seeds and got super-sized vegetables the next day. The outer layers usually have a tenacious sprinkling of fine grit as well. Fortunately, the internet has the answer, and this link has everything you need to know about cleaning leeks. Turns out it's not that difficult.

Start by cutting off the root and then slicing the leek lengthwise up the middle. Discard the tough, dirty outer layers.

Keep the white part and the pale green, but chop off the tough dark green top.

Then, slice the leek halves crosswise into 1/4" sections.

Place the chopped sections in a large bowl, fill it with cool water, and agitate the pieces with your fingers to dislodge any grit. Pull the pieces out by the handful and put in a collander. Discard the gritty water. I like to repeat this process a couple of times to make sure that everything is super clean.

Now you have nice, flavourful, clean leek pieces and you're ready to get started on the recipe.

Heat oil over medium heat in a large pot with a lid.

Cook potatoes and leeks in oil, with pot covered, approximately 10 minutes, stirring often to make sure nothing sticks to the bottom of the pot.

Add stock and water, and bring to a boil

Reduce to simmer, cover and cook until vegetables are very soft, approximately 30 minutes.

Remove from heat and allow mixture to cool, approximately one hour.

Place a collander over a large bowl and empty the contents of the pot into the collander, reserving the liquid in the bowl. Place the strained potatoes and leeks into a blender and blend well on medium for about 30 seconds.

Pour the liquid from the bowl into a large measuring cup or other container with a spout. With the blender still running, slowly pour the liquid through the top. Keep adding liquid until the blender can't take any more. Keep blending until the mixture is utterly smooth.