Next in ToC: Grilled Tempeh Bowl with Vegan Mushroom Gravy 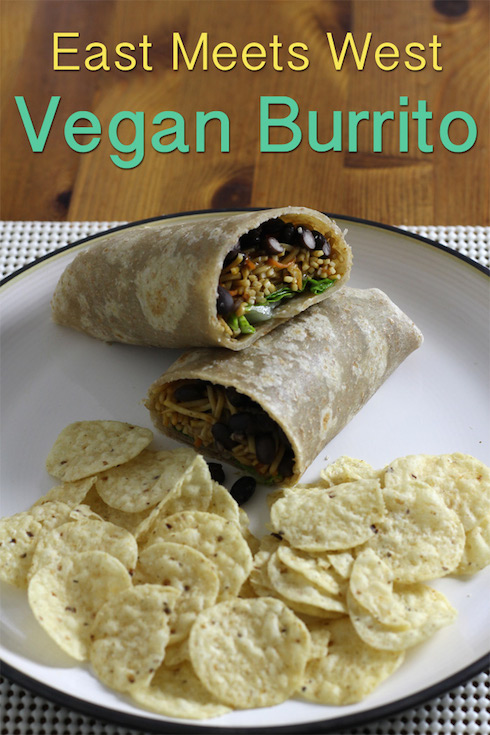 Vegan burritos deserve to have daring and exotic ingredients that complement eachother and leave you satisfied. I was at a local burrito place not too long ago with just such a vegan offering, one that actually seemed more appetizing to me than anything else on their menu. It was chock full of interesting flavours and textures to the point that every bite was different than the one before. I left pleasantly full with my mouth slightly burning and my mind percolating ideas about concocting something similar at home. Toronto's vast cultural mosaic inspires me yet again.

The genius part of this burrito was the replacement of the usual Mexican rice with chow mein noodles. Maybe this is old news or common practice, but this chow-mein-instead-of-rice invention sure was new to me, and I loved it. Spicy black beans also figured prominently, as did pressed tofu and edamame. My version is not quite so ambitious, although it's a base that can be built upon. The required elements are the beans and the chow mein, and on top of that I added some salsa verde and romaine lettuce.

I may have slightly underestimated the commitment required to produce even this simplified recipe. There are a lot of moving parts, but fortunately for me, many of those parts are things I've made before. I gave the beans a chipotle flavour in the slow cooker, in essentially the same way as I did with the Chipotle Refried Beans recipe. I just didn't blend or refry them. Instead I left them in the cooking liquid and pulled the beans out as I needed them with a slotted spoon. The chipotle spice produces a fair bit of heat, so you might want to dial it back if that's not to your liking. I've also done a Vegan Chow Mein recipe before so that part was fairly easy to whip up. Finally, I just finished an experiment with Homemade Flour Tortillas because I wanted them for this recipe.

Hopefully, you'll see this as a jumping off point for your own creativity. With a little advance planning to have the beans ready, a rainy Saturday afternoon is all it takes to pull together the other pieces and any other flavour additions your heart might desire. Enjoy.

shredded lettuce, chopped tomatoes or any other bite-sized veggies

Soak the beans in a large bowl of water for at least 8 hours.

Drain the beans, discarding the water, and rinse them well. Put the beans along with the 4 cups water, garlic and dry spices except the salt in a large slow cooker (mine is 6 quarts).

Cook on high for 5-6 hours, checking occasionally for tenderness. (While the beans are cooking, you can make some chow mein and/or flour tortillas.) The skin on the beans should mostly stay intact but they should be nice and soft when done. Add the salt at the very end and mix well.

Put a frying pan or griddle on medium heat to warm through the burritos.

From here, it's just a matter of putting the burritos together. Start with the beans (pull them out of the slow cooker with a slotted spoon), then chow mein, then salsa, then veggies as shown.

Finally, carefully tuck in the two ends of the burrito and roll the close end over the fillings and roll.

Place the finished burrito on the frying pan or griddle, seam side down to seal it and warm it through.